Never have come across this. Is this permitted or do I have to request this permission?

Just planning ahead to my possible next trip, I am already scouting the area to see if flying will be permitted. But in the search for the area, I have come across this very bright pink areas and it doesn’t make fully sense.
Red, bright pink and similar colours would indicate warning to me, so I am a little confused as it says that “ The Crown Estate grant permission for drone flights taking place on Crown Estate foreshore”. If I interprétate this correctly, does it mean that the permission is already granted within this pink area?
Also, right next to where I stay, there seems to be a lighthouse with a helipad, but does not say anything about drone around it. I find that interesting. Any thoughts on them two questions? 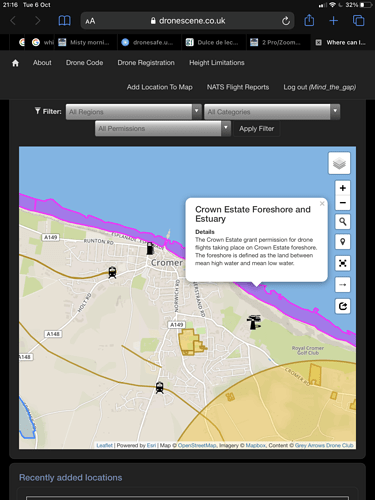 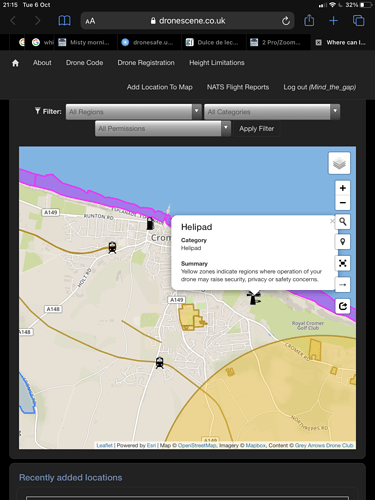 Of course, sorry, I was battling with loading the pics. You’re very fast replying

Not what I’d call “pink” … that’s what I would call the way FRZs and Class D are represented.

Lighthouse (and many other helipads, [most] hospitals for instance) don’t have any restricted zones around them. Their usage isn’t frequent enough or intense enough, to justify them. Just give them, and the airspace around them, a sensible amount of space … and keep your ears open.
Lighthouse helipads are very rarely used … for maintenance, mainly.

That Helipad has not been used for years !, it is basically a piece of grass/tarmac beside the Old Cromer Lighthouse. 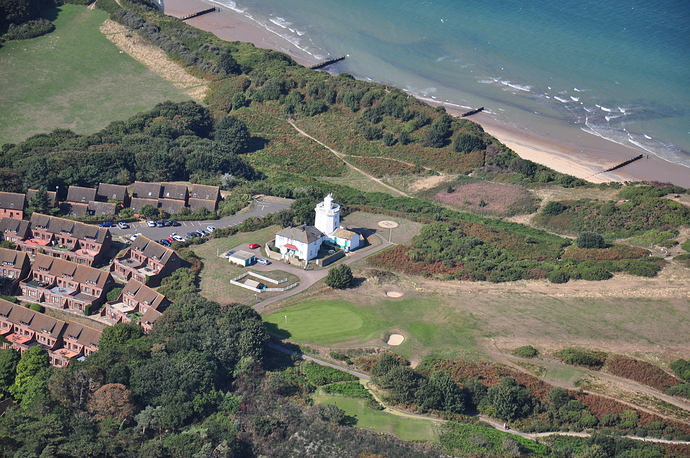 Fly from the path/beach ,and you will be fine.

Thank you both for your comments @chrisjohnbaker, ok I will use the beach and the path to take off. Thanks.
@OzoneVibe, I am afraid I did not understood what you meant.
FRZ is referred to flight restricted zones? So I cannot fly in there?

You referred to the foreshore area as “pink” … it’s not what I’d call “pink”, was all.FRZs are more pink.

My advice (as always) is to fly at low tide, so that the Crown Estates ruling of flying between High and Low water is kept.

Ok thanks. I get it now, it’s more fucsia than pink.

Looks lovely there. Hope we can make it and that the weather is great. Hardly nothing to ask for eh?

Thank you both for the fast responses.

It is a lovely area, you must get to Beeston Bump (near Sheringham) highest point on the coast around here.
And it will be quite enough to drone from the top at this time of year.

Thank you for that. We usually go to Hunstanton, but myself I’ve never been to this area. Looks great.

Another question on relation to deonescene is on these two screnshots

Might sound a silly question, but it does not specify what are the limitations. I would of though that National Trust would not allow flying altogether, however, the second screenshot I would if though that you are allowed to fly on it.

Any thoughts on this two?

Probably “Open Access” means there’s nobody there to charge you an entry fee.

I believe @Pterodactyl is correct - it’s all NT land open to the public, the “Limited Access” area is just the bit where they charge admission. Note that even in some Limited Access areas, there are Public Rights of Way which allow you to pass through.

Also note that the NT own far more land than is shown in these layers on DroneScene, as shown on their Land Ownership Map, but that extra land isn’t made available via the data that DroneScene has access to.

Minor note of caution: the NT layer on Drone Scene shows NT land which is “always open” to the public (typically open space with no entry fee) or “limited access” to the public (typically houses and gardens with an entry fee). This is not the limit of NT’s land ownership. As you can see from this example near where I live, they own a lot more beyond the land where they permit access: [Clipboard0c] The red bounded area is the limited public access; everything in blue was acquired by the NT at …

I would of though that National Trust would not allow flying altogether,

Regular reminder that there is no strict prohibition on flying over NT property: their byelaws criminalise you if you cause a nuisance, but say nothing about flying across. Fly over at a quiet time when nobody’s around and you’re fine. And the most they can do about taking off/landing from their land is declare you a trespasser and ask you to move off (again, so long as not causing a nuisance).

I would of though that National Trust would not allow flying altogether,

As can be found in many posts from over the years:

So the NT layer on Drone Scene is simply so that you can anticipate where you will be hated … and expect grief, and potentially worsen the image of drone flyers should you provoke their ire.

But, as is also often repeated, they cannot stop you taking off from adjacent land (providing there aren’t other reasons that prevent you) and overfly their many photogenic sites.

The fact that some are designated “Limited Access” and others “Open Access” is only included since the data extracted from the NT website provides this differentiation, and is repeated on Drone Scene FYI.

More info on the differentiation can be found on the NT site at : https://uk-nationaltrust.opendata.arcgis.com/

This layer shows the approximately 114,000 hectares of National Trust land that the public has access to on foot only (last updated: May 2017) – either by right (in the case of designated ‘Access Land’ under the Countryside (Rights of Way) Act 2000 (CRoW)) or by permission from the National Trust. Rights over Access Land are limited by CRoW and may be further restricted or excluded due to particular land management reasons.

This layer shows the approximately 19,300 hectares of National Trust land where the public has limited access (last updated: May 2017). This data shows areas where access is restricted for at least one of the following reasons:

If you search on Youtube, there are various videos about your questions on crown estates look for
Mr MPW, lot’s of interesting questions and answers etc.

Very interesting. Thank you for sharing it.
I was looking at this particular video as it talks about my current drone and the regulations about it. 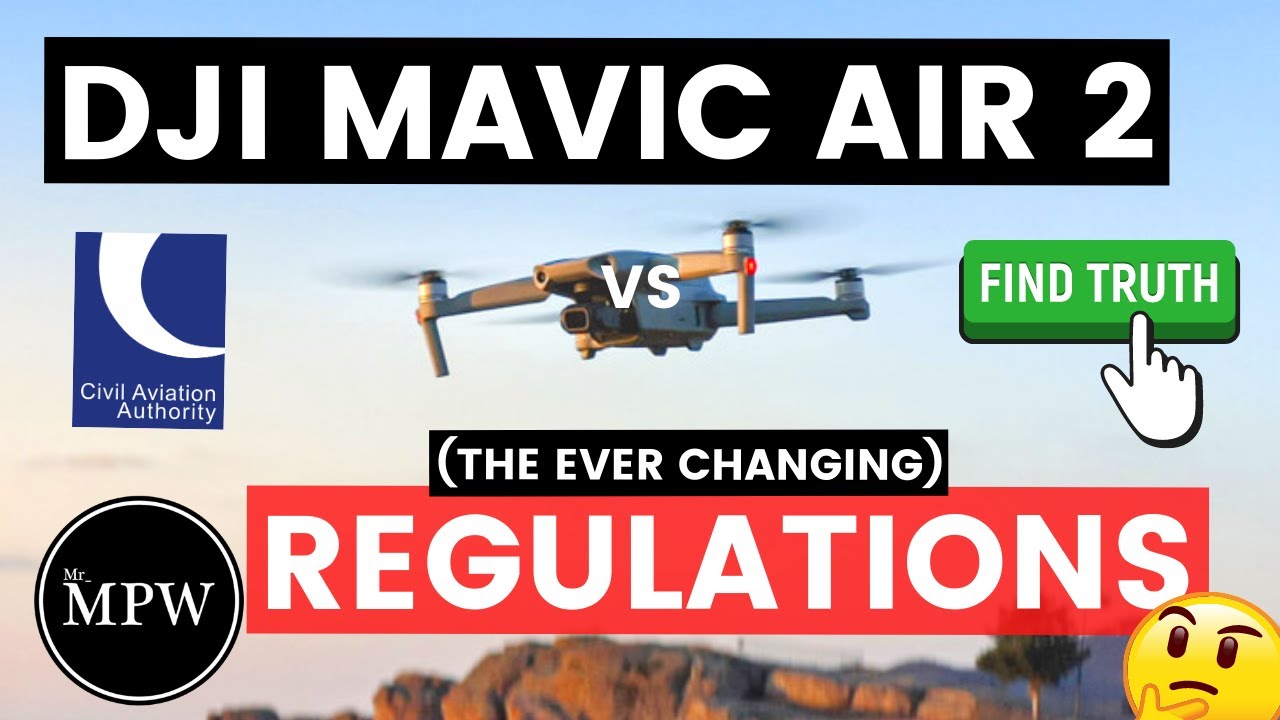