Continuing the discussion from The death of a DJI Mini 3 Pro:

This prompts me to ask:

On the Mini2 I understand if you pull both joysticks diagonally in and down you shut off the propellers. I’m sure this would show on the flight record so I’m not suggesting this could of happened to @manor1013 . I am however concerned that when learning to fly this could be an easy mistake to make as you try out different manoeuvre’s,

Has any heard of this happening accidentally?

I guess the drone would just fall out of the sky, great if that’s what you need but disastrous if you do it by mistake.

No this didn’t happen and would show on the flight logs, this shows the last stick movement (left stick up)

Has any heard of this happening accidentally?

Aren’t CSC commands mid flight defaulted to “Emergency” in the app nowadays, instead of “Anytime”? It’s been a while since I checked.

Even so, activating CSC accidentally mid-flight would be very unlikely, as you’d have to be decending and yawing at top speed, and also rolling and pitching at top speed. Not your average day move, not even for me

OK, if it is defaulting to “Emergency”, that’s safe, as the drone will decide “when” to turn the motors off mid-flight instead of the operator. If its set to “Anytime”, the operator has full control.

it’s the kind of stupid thing I could see me doing. I am still learning to fly and have got some great cinematic shots. I tend to fly slowly and always with VLOS. I have a mown field near me (an unofficial park) where I practice basic flying at greater speeds and try all kinds of combinations to see how the drone reacts. I’ve noticed my Mini 2 dips and goes about half a metre lower when I fly forward at speed, something I wouldn’t want to happen when low over water. So my antics and playing are proving to be really useful.

I think I’m just a worrier

We were all the same when starting out. It’s natural. And the one day you’ll realise “I’m not worried anymore”

But in the event that you do kill the motors mid-flight, make sure you post the footage on YouTube!

the operator has full control

Ah now you got me thinking I’m sure I pull the sticks in or out diagonal to start motors but I’m sure if you do the same in mid flight the motors cut out , I see a YT video where the guy does it purposely and restarts the motors and low and behold it went back up after free fall .
Let me see if I can find the video

as my precious little drone crashes into a cow pat. 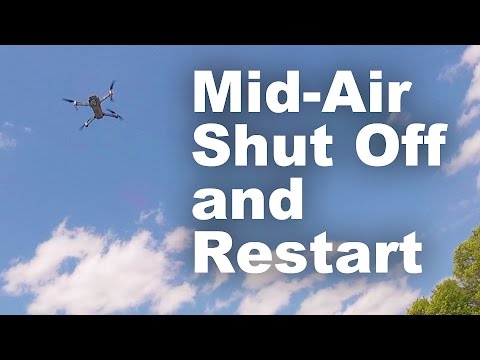 I don’t recommend it !

I just saw the one where a guy tries to catch his mini1 in a sheet after a deliberate motor cut.
It didn’t work

“I’m shaking”. Love it, quick reactions too! Thanks @Kirky

just an old shitter I weren’t bothered about I’d give it a go , not something I’d do with my one and only tho

bad enough losing the one in the lake which was an accident
Knowing my luck the one I wouldn’t care about would probably survive !

High all, just wondering what your views are on the emergency stop by pushing both sticks down and to one side the same way as you can start the motors. My worry is I do a lot of manual Maneuvers and that one day the drone would fall out of the sky because I accidentally put both sticks in that position. Can that actually happen?

@milkmanchris my sincere apologies for doubling up that YT video , had no idea it had been posted sometime ago on a couple of occasions , please feel free to remove it if necessary , had never seen it here before that said I’ve never looked for it before my appologies

No worries , I knew it had come up before (sad admin life I live)

I’ve seen people I’ve mentored witH FPVUK make that movement several times thinking they are down on both sticks.

I’ve also had a play at 120m doing the same, it’s bum clenching

Yeah I think I’ll give that a miss for now

You guys do a great job

and it does clearly state check too see if the topic has been mentioned before you start a new one etc yes it’s easy to get carried away so I do understand you guys like to keep it neat and tidy , nothing worse then a mess or unorganised for better word