Taking Flight: The Future of Drones in the UK - Government Response

Further to Your Hobby Needs You! and Open consultation Drone legislation: use, restrictions and enforcement

Taking Flight: The Future of Drones in the UK (Government Response).pdf (5.3 MB)

If anyone finds an Executive Summary, please let me know

‘electronic conspicuity’
So maybe those of us who build our drones need another tx on board?

If this goes down the route expected I’d expect drone equipment to be forced into ‘construction and use’ regulation similar to motor vehicles and aircraft. The vehicle itself would need to be certified with regards features etc, consider it an air worthiness cert that would detail the lighting and other features required, pilots will be certified according to what they can fly and under what conditions, similar to how the UK driving license works.

Provisional license holders must be accompanied by a pilot that has held a license for at least a year.

I can see the imports of cheap drone tech that doesn’t comply getting seriously curtailed.

Just my opinions of course.

Thought this was a useful bit of information to extract regarding where the ‘Protected Areodromes’ are located. 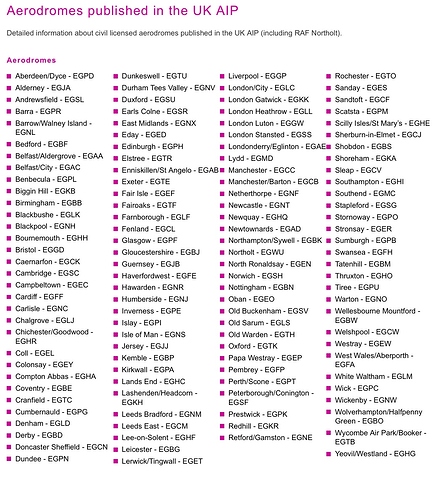 As such, the Government is taking action to amend the current restriction zone. The new restriction zone will include rectangular extensions from the end of runways measuring 5km long by 1km wide to better protect take-off and landing paths. In addition, all drones will be required to ask permission from the airport’s Air Traffic Control to fly within the ATZ (see paragraph 2.2). The overall restriction zone is displayed in the diagram overleaf. The new zone will apply to all small drones weighing more than 250g. 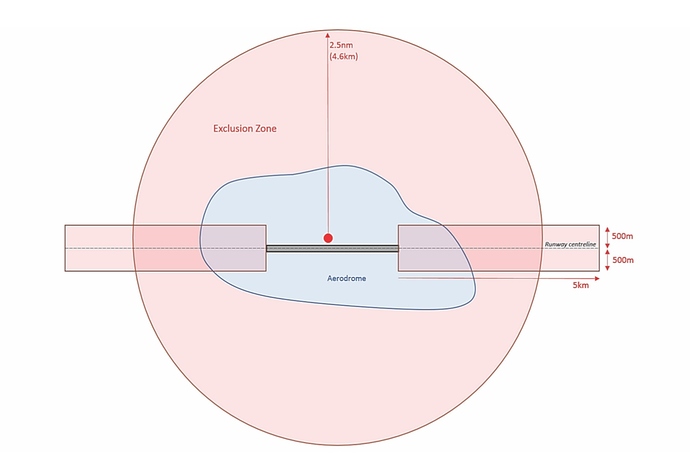 Minimum Age - basically no decision yet

The Government still supports a minimum operator age, but will defer a decision until there is clarification and confirmation from EASA regarding future legislation at the 14. European level1 with regards minimum ages for drone operators and remote pilots. Any minimum age requirements will need to be factored into the IT systems used to register drone operators and allow online testing of remote pilots. The Government will be looking for resolution on this issue from EASA imminently.

Nice to see they are working with hobbyists. Take note Coventry City Council!

2.28 Since the consultation was published, the following permissions have been granted
by the CAA.
• Members of:
─ The Society of Model Aeronautical Engineers trading as the British Model
Flying Association (BMFA);
─ The Scottish Aeromodellers Association (SAA);
─ The Large Model Association (LMA); and
─ FPV UK
may operate a small unmanned aircraft of a weight below 7kg in excess of 400
feet above the surface, subject to the conditions laid out by the CAA which can be
found at https://bmfa.org/DesktopModules/Bring2mind/DMX/Download.aspx?Command=Core_Download&EntryId=2643&language=en-GB&PortalId=0&TabId=1506.

• Members of the above list of associations are exempt from the requirement to
ensure that direct unaided visual contact is maintained with the aircraft provided
the SUA does not exceed 3.5kg, at heights lower than 1000ft and that first person
view is maintained. A full list of additional conditions can be found at
https://bmfa.org/DesktopModules/Bring2mind/DMX/Download.aspx?Command=Core_Download&EntryId=2644&language=en-GB&PortalId=0&TabId=1506

The BMFA links are dead…

Sorry thats my copy and paste.

If you go to relevant section in pdf they work.

Edit - reading into it drones are not covered by either exemption as have autonomous features and more than one llift/thrust producing motor.

Model aircraft clubs don’t like being included as drones! Govt response is

The Government will continue working with model aircraft associations to discuss the possibility of future exemptions. We are keen to minimise, if possible, the burden on those members of model aircraft associations who are already registered through a club and have already passed certain competency tests. However, this must be achieved without imposing undue burden on the state and the taxpayer, whilst also being efficient and enforceable, without compromising the integrity of the policy. A blanket exemption from registration and competency tests, as suggested in many of the consultation responses submitted by model fliers, will not meet these criteria.
2.30 These criteria and possible solutions that meet them will be subject to further discussion between the model aircraft flying associations and the Department for Transport. A decision will be required before the final development and implementation of the operator registration and remote pilot competency testing IT systems, which are set to go live on 1st October 2019 and become a legal requirement on 30th November 2019.

No, 1000ft only applies if is is a single engine model

Or as in the jargon,

Summary of proposed police powers, some changes from the consultation as felt original suggested were nor proportionate!

FPN offences being taken forward
3.15 FPNs will be attached to the below offences:
• Not producing registration documentation, and/or proof of registration for drones between 250g and up to and including 20kg in mass, at the request of a police constable;
• Not producing evidence of any other relevant permissions required by legislation, for example if you are a commercial drone operator or have an exemption from the CAA from an ANO 2016 article;
• Not complying with a police officer when instructed to land a drone; and
• Flying a drone without a valid acknowledgement of competency, or failure to provide evidence of meeting this competency requirement when requested.
3.16 Other offences under the ANO, such as flying a small drone (SUA) with a camera or other data collection device within 50m of people, vehicles or buildings may also be subject to a FPN but only under certain conditions. An FPN may be issued where a constable believes that the offender did not, and did not intend to:
• endanger any other aircraft (whether or not an unmanned aircraft);
• cause any persons harm, harassment, alarm or distress;
• cause any persons occupying any premises nuisance or annoyance relating to their occupation of the premises;
• undermine security or good order in prisons or in other institutions where persons are lawfully detained;
• disturb public order; or
• damage property (including land or buildings).

…the Government has decided not to mandate the use of a FINS at this time, but will nevertheless continue to develop the policy as part of wider aviation strategies, including as part of an unmanned traffic management (UTM) system. Not implementing a requirement to use a FINS at this time will allow for a more cohesive approach to airspace management which recognises all those using our airspace, not just drones. Based on future developments we will continue to assess the need for this policy, which will be largely dependent on future options and timescales for unlocking unmanned traffic management.
3.23 While this policy is being reviewed, the Government will continue to work closely with the CAA to educate drone users, which is crucial to improve safety. This will be achieved by promoting the use of current drone information ‘apps’ and developing best practice guidelines, to help encourage their use and improve consistency of data. We will engage with industry leaders in order to achieve this, which will feed into shaping future policy in this area.

Well that makes sense - FINS would require a mobile data connection and since, despite the balderdash the mobile companies come up with regarding coverage, there frequently isn’t one, FINS as suggested in the consultation document couldn’t have worked anyway

That completes a summary of what they say they are going to do and what is on hold.

Loads more contents on summarising the responses in the document as well as on predictions on the future of drone technology - which is all likely to see an increase in the use of drones.

If interested, the report it is worth a read through. Clearly there were a large and diverse range of views submitted to consultation. And I think that the large range from individual drone owners , such as GADC members, has had some effect which is shown in some of the areas which have been ammended from the original proposals such as the minimum age and the reduction on the proposed police powers.

This YT video from Ikopta is a summary of above 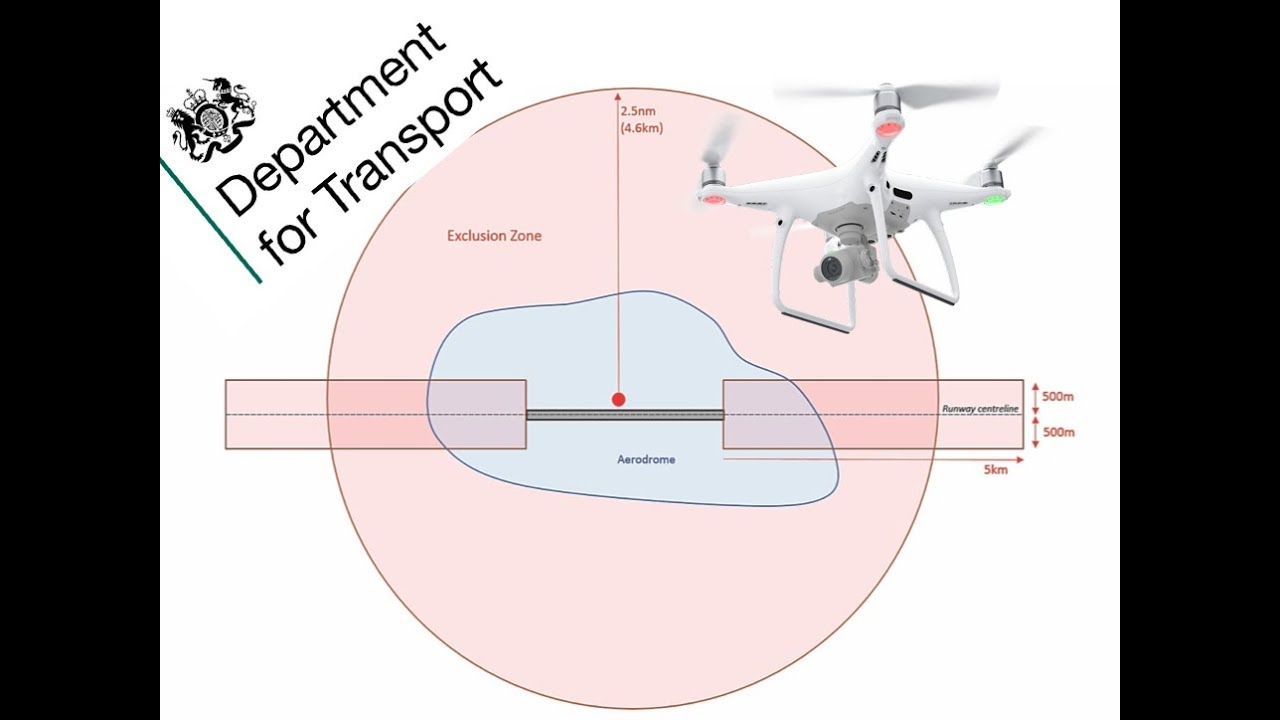