Well that’s just spoilt my evening. I’ve just found that Forestry Commission Scotland do not allow drone flying on their land or overflying. Given that the field behind my house is Forestry Commission and a huge amount of land here belongs to them too, it severely restricts places to fly. I would not fly where there were people or disturb wildlife, but it seems to be a blanket ban. There seems to be a point of view that you can overfly above 50m but below 400’ but Scotland has this complicated Scottish Outdoor Access Code thing going on.
Any advice, opinions etc? What would happen if I was caught flying 70m over an empty field, within the drone code rules?
If I got pfco certified, is it likely they would say “OK, go ahead” I could be quite legitimately filming commercially, doing a video I hoped to sell one day, having filed a flight plan, done a risk assessment etc.
Cheers
Andrew

I’m not sure if they can stop overflying.

I did try look into it but got distracted by teacakes and such.

Had another read into it.

“This is because this activity is often incompatible with responsible access under the Scottish Outdoor Access Code”.

Ok so the three principles of the outdoor access code are.

• Respect the interests of other people.
• Care for the environment.
• Take responsibility for your own actions.

The only issue I can see is in relation to the first principle and that would be noise and privacy.

Drones are getting quieter and if your flying in accordance with the drone code, noise and privacy is unlikely to be an issue.

It’s a cop out, but at the end of the day it’s their land and they have the right to prevent you taking off and landing on it.

I wouldn’t be worried about taking off elsewhere and over flying as long as it was within drone code.

Thanks Callum. That was my reading of it too. Most of the time there isn’t a soul for miles and, sadly, no visible wildlife because of the monoculture. Its a bit rich when they create hundreds and thousands of acres of sheer devastation after felling! I’ve recently been doing some aerial shots of badger setts which are very revealing, but a lot of them are on FCS land of course. All we need is for Crown Estates to get arsey and we’ll be stuffed.
If only the Mavic Air was a bit quieter! Here’s a nice shot of a sett from only about 50’ up but it gives a completely different perspective that you can’t see from the ground. 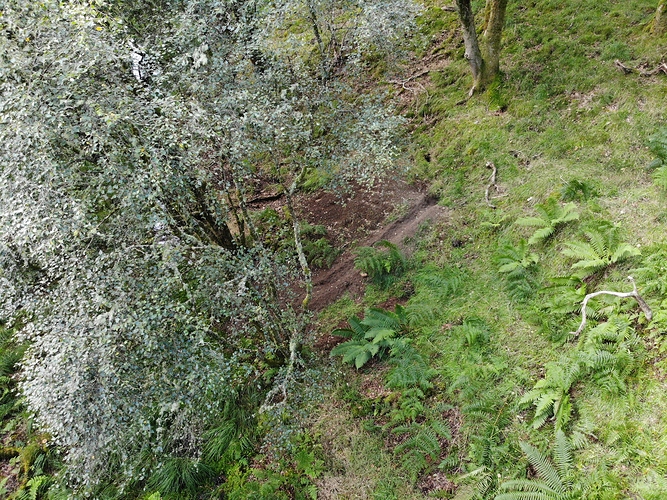 Do they not use a far larger number of chainsaws, etc., on their land far more often and over a far larger extent of that land … than could ever be envisaged by drones?

They do indeed Dave, it’s absolute mayhem when they are logging.

I’m currently awaiting a response from the Forestry Commission Scotland to a formal complaint I raised with them concerning their non-compliance with their obligations under the Scottish Outdoor Access Code/Land Reform Act in relation to drone use.

I’d submitted a FOI request enquiring as to how they had reached their position on banning all drones from FCS land, and the response that came back was very weak - pretty much saying that:

My argument that they are in non-compliance with their SOAC obligations is basically:

Getting your PfCO won’t make things much easier - they normally want at least a month’s notice of any intention to fly on FCS land, and want to see a risk assessment/evidence of insurance.

A long response I know - but this is a current bugbear with me, and I’ll keep you updated on the outcome of my complaint.

If you are unhappy with the FCS current position regarding drones, you can always contact your local Access Officer at your local Council to register your displeasure, stating that you don’t beleive FCS to be in compliance with their SOAC obligations

I wouldn’t worry. As long as you don’t take of and land on their land, they isn’t anything they can do… even if the Police are called due to being under resourced nobody will attend…

Dave’s right Darren. The law is different in Scotland. On the face of it, the Scottish Outdoor Access Code (right to roam) sounds like a relaxation of laws and a good thing for everyone, however, it does give the Forestry Commission and others a great getout clause. I do believe they can rightfully ban flyover because of disturbing people / wildlife. I’m also interested in whether it would be a criminal or civil offence and what the penalties would be. Anyone have knowledge of penalties imposed to date?

Well done for the detailed answer Dave. I like the FOI request. I agree totally that the SOAC should also be in favour of the responsible drone flyer, not always against us. I will put together a complaint as well.
Thanks.

Not sure if you’ve come across this PDF on the net or in my other thread on SOAC.

Some good points in it that may aid your complaint

Thanks Callum, that’s a very interesting paper. It’s not absolutely clear who Rob Garner is but I believe he is writing on behalf of SNH rather than FCS. It’s not quite factual in that I believe you can fly within 50m of a person “in your control” or a vehicle “in your control”.
Food for thought, though.

Thanks for that Callum.

At the moment I’m waiting to see what FCS response is, and then will consider the next step. I’ve made my local Access Officer aware of the problem, so there’s that route to go down too.

Ideally this will be resolved in a constructive manner by FCS, or via interaction with the NAF / SNH

Ok is flying a drone a crime in law tbh I don’t think so then it would be a civil case that the landowner would bring against you as if you follow the drone code and take off away from the landowners property would the police/sheriff be able to arrest you?

But I could be wrong legal aspects are different in Scotland

Trespass law in Scotland is if you enter land with a firearm or hunting animal.
That’s a short version,I don’t think drones wherever mentioned

Ideally this will be resolved in a constructive manner by FCS, or via interaction with the NAF / SNH

Definately sounds like your going about it the right way.

I suppose what comes out of it could have wider implications as far as SOAC is concerned.

I hope so - it would be nice to have drone use clearly identified as a recreational activity/pastime in the SOAC.